QC Robert Griffiths on how to thrive on a sticky wicket; THE BIG INTERVIEW Robert Llewellyn Jones talks one to of the UK’s leading commercial QCs, Welshman Robert Griffiths, on his life at the Bar and his love of cricket.

THE BAR is a profession to which many are called but few are chosen.

Robert Griffiths QC is one of the chosen.

At his chambers in Gray’s Inn Court the Pembrokeshire-born advocate, described by The Times as “one of the sharpest barristers in the land” talks about his practice across an array of specialist areas ranging from commercial litigation, planning and media to property, environmental, employment and sports laws.

He is an avid follower of sport having been both a participant and an administrator.

While at Haverfordwest Grammar School he represented the Welsh Secondary Schools at both cricket and rugby and it’s from cricket that he draws an analogy of life at the Bar.

“You retain a vivid memory of what happened and what you did,” he said reflecting on his legal career.

“The same way that I can remember a cover drive I played 40 years ago. In court it’s a moment of cross-examination when you wonder why you asked a particular question. It seems as though the memory retains those things that coincide with that combination of enthusiasm for what you are doing and nervousness for doing it in public. They combine and remain memories.”

His legal career spans 40 years and apart from a brief interlude playing cricket for the Glamorgan second XI, law has been his only employment.

“There’s a relationship between playing sport and playing at being a barrister. There are so many similarities with sport. I’m chairman of the Laws of Cricket Committee which influence the way players play.” “At the Bar you have a legal system which is a system of rules and you play within the rules plus the competitive nature of the exercise. Our system is adversarial – claimant against defendant, prosecution again defence.

“The players play in court with a judge as referee and there are winners and losers.”

Working in a competitive environment is something he enjoys and, realising he couldn’t be a sportsman, opted for the next best and went straight from playing cricket into the legal world.

“There is so much I’ve learned from playing sport that can be used in another arena which is the court itself,” he said.

Following a decision to abandon plans to proceed with a master plan for a major PS400m redevelopment of Lord’s, which he was instrumental in formulating, he was labelled a “dissenter” by one national newspaper.

It’s not a term he disagrees with although he qualifies this by saying “I am by temperament, though I don’t always disagree.”

Of its Welsh connotation he added: “There is a distinctly nonconformist side to me which comes from my Welsh background.

My father lived near Llansamlet and was a Welsh-speaking baptist.

“My grandfather was a miner who developed a smallholding which became a farm still owned by my family.”

From his attendance at chapel with its Welsh ethos and listening to those who preached there, he became enthralled with what he now calls “advocacy of a different kind but still extremely impressive”.

He saw timing and rhythm, important ingredients in advocacy and the use of words. He said: “If you are comfortable with using words, can think on your feet and develop an argument, there’s a momentum related to fluency.” In October, 2007 Mr Griffiths became The Times’ lawyer of the week for his representation of Test umpire Darrell Hair in his claim against the International Cricket Council in respect of the ball tampering affair at the Oval.

Recalling the case and the role he played in it he said: “Darrell Hair had been heavily criticised for not fudging the issue of ball tampering. I was involved with the MCC and was asked what I thought of his position.

“So far as I could see what he was doing was in good faith, acting within the laws and the spirit of the game while the politics behind the scenes were such as to try and fudge the issue because it was England and Pakistan.

“Hair’s advisers asked me to represent him, which I did, because there seemed to me to be a prima facie injustice.”

Another dissenter Mr Griffiths has been instructed by was the late Kerry Packer whose standing counsel in England he became.

“I was asked to meet him in Sydney where we had lunch during which I asked him if I should give my opinion on some cases he was involved in,” said Mr Griffiths.

The response was a flood of expletives to the effect that the media mogul wasn’t interested in an opinion – only a result.

Of Packer he said: “He was a strong character and perhaps much maligned, but he transformed the world of cricket.” In this context MCC dissenter seems, he believes, a contradiction in terms – the MCC being the establishment and Robert Griffiths from Haverfordwest expressing views to the contrary. Having a cricket background, he was originally invited to sit on the MCC’s estates committee with former Glamorgan captain Tony Lewis who was then MCC president.

This led to an involvement in staging agreements of Test matches and to chairing the negotiations between the MCC and the England and Wales Cricket Board which were central to the future of cricket. This work resulted in his being elected to the main committee and eventually chairman of the Laws Committee.

Although perhaps perceived as a dissenter, the MCC remains close to his heart and he concedes: “Dissenter is a better word than rebel.”

Over the development of Lord’s where he was chairman of the Development Committee whose vision for the ground was rejected, he said: “One day it may happen and I have been criticised for being too enthusiastic about it, but there’s no point in representing someone or something if you don’t put everything into it.”

Now his practice is more commercial although he remains, he said, eclectic. Representing disputatious businessmen who move in a highly competitive world is always a challenge as he explained: “Successful businessmen have that heightened competitive edge and can only survive by having this.

“If you are their barrister they want someone who understands their world and can communicate in a form acceptable to the courts.

“That requires sensitivity towards the needs of the client, an appreciation of the businessman’s position.

“To do this you have to understand their motivation and appreciate the nuances of a business deal.”

A recent case he appeared in at the Supreme Court involved the extent to which financial considerations are relevant in decision making by local authorities.

He explained: “It seemed an obvious point, but it wasn’t until we got to the Supreme Court that it was established that making a decision, in this case a planning authority, could take into account the financial consequences of a decision. “So in commercial work you have to look at things with a reality check and ask is this dispute a dispute that merits a commercial trial? Can it be resolved without going to court.” Of planning and planning procedures there are, he said, too many opportunities for people to object.

He said if the interest represented is a powerful one the developer is prevented from going forward until there has been a public inquiry which incurs a huge commercial downturn.

He added: “One of the problems the government has in the current economic climate is making sure you keep the balance between protecting the public interest but in such a way as not to prevent the delivery of sustainable development.

“In this, public interest is important, but an important component is the private interest and perhaps a recession highlights this imbalance.” At 64 the QC has no thoughts of retirement. 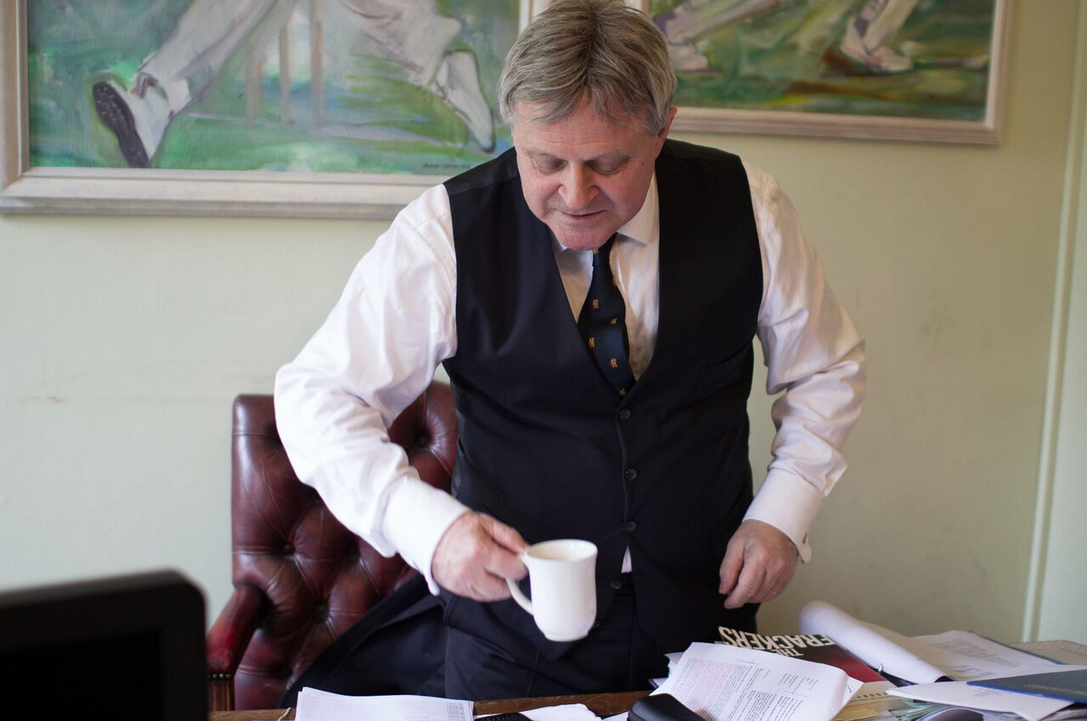 There is, he explained, no retirement at the Bar.

“But it can retire you if you get no work,” he said. He added: “I regard myself as relatively young and I still enjoy the thrill of a new case.

“As head of chambers I see others develop. Then there’s the opportunity to help those starting in the profession.” His advice to them is: “Never envy the success of others.

“You have to remove this from your mind since the Bar is highly competitive but I admire the performance of my opponent and there’s a bond – a fellowship between advocates.”

It’s now lunchtime and the walk outside his window has filled with clerks and secretaries enjoying the sunshine and their food al fresco.

This seems the opportune time to ask a master in the art of questioning a final question: “Has there been a case that stood out from the many he has conducted over the years?” He cites the case of Mittal v Varma, a multi-million-pound claim against Britain’s richest man Lakshimi Mittal, chairman and chief executive of ArcelorMittal, brought by rice importer Manmohan Varma. “It was a high-profile case with lots of money involving an oil field in Nigeria. I was instructed to appear for the claimant, Mr Varma, and it gave me an insight into how businessmen at that level and from a certain background, operate.

“You have to immerse yourself in that world. The stakes were high and I enjoyed doing it.”

Then there was the time in 1977 he appeared before Britain’s most famous judge, Lord Denning, Master of the Rolls, after only three years at the Bar.

Again he draws on a cricketing analogy.

” It was like going out to bat in a Test match. I worked hard to prepare the case and won it which gave me confidence in the same way sport had given me confidence to embark on a career at the Bar.”

In a room full of cricket memorabilia and booked-lined walls piled high with legal tomes and works on cricket he said: “It was about ground development and that the agreement entered into with Tesco and the planning authority was a valid and enforceable agreement. “I felt the pressure on me then because if Lancashire hadn’t won there would have been problems.

“Fortunately we were successful.”

In the world of Robert Griffiths QC it was a winning hit.

GRIFFITHS’ CV Robert Griffiths, below, was raised in Pembrokeshire and still regards Haverfordwest as home.

He was educated in the town’s grammar school from which he won an open scholarship to St Edmunds Hall, Oxford, graduating in 1972.

Now people can achieve their ambitions without leaving.

“There is, no longer, a feeling that leaving Wales is the way forward to succeed professionally.”