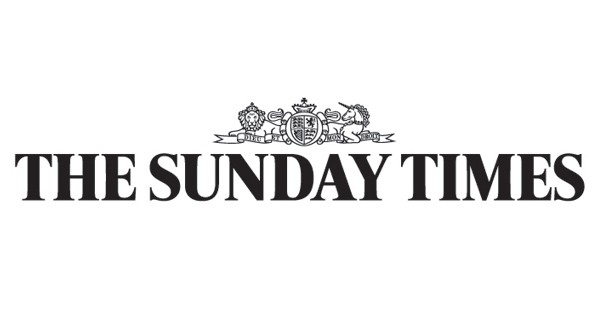 Lascelles House, on a Barbados sugar plantation, was built on the slave trade, but today plays host to West Indian cricket greats – and is yours to rent for 1,250 a day.

Ah, Barbados, land of Little England, cricket, coconuts and, er, Simon Cowell. But don’t scoff at the celebrities who pass through the Caribbean each year on their wetbikes. Their presence is soon to be sought not merely on the beach at Sandy Lane, but at dignified dinners and charity functions in one of the oldest plantation houses on the island, a building synonymous with slavery in the West Indies.

Lascelles House, in Holetown, just inland from the fashionable west coast, was named after Edwin Lascelles (1713 – 95), a customs officer and slave trader with 10 plantations, who built Harewood House, near Leeds – one of the foremost stately homes in Britain – thanks to profits from sugar and rum. His cousin, Edward, who inherited his properties, became the first Earl of Harewood; a descendant, George Lascelles, is first cousin to the Queen.

Edwin was vehemently opposed to the abolition movement, led by William Wilberforce – a position from which the second Earl, Henry (Edward’s son) tried to distance himself in the early 19th century by printing posters denying any involvement.

By 2007, matters had turned full circle: a celebration of the abolition of slavery was staged at Harewood and the 18th century papers that had been passed down through the Lascelles family were sent to the archivists at the University of York.

So the grandeur of Lasceles House is a given, although there are larger plantation houses further inland. Sugar was, and still is, mainly grown in the middle of the island. Originally, Lascelles owned 1,570 acres; the property now has just three, although the 18th century mill survives.

In the intervening years, it has passed through a number of hands. British Airways owned it for a while, during which time it was a base for their flight crews, and it was later acquired by the inevitable dotcom millionaire.

Since 2004, it has been the property of Robert Griffiths, 63, a QC who has been heavily involved with planning the rebuilding of cricket grounds such as Lord’s, The Oval, Old Trafford and the Country Ground, Bristol. No surprise, then, that Griffiths, who also chairs the MCC’s laws of cricket committee, and his wife, Angela, 56, have thrown parties at which Curtly Ambrose, the giant West Indies fast bowler, and Richie Richardson, the former West Indies captain, have played the guitar, or that Garry Sobers and Gordon Greenidge, two other great Caribbean cricketers, have been among the guests. More recently, Julia Carling, ex-wife of the former England rugby captain, Will, has stayed there. 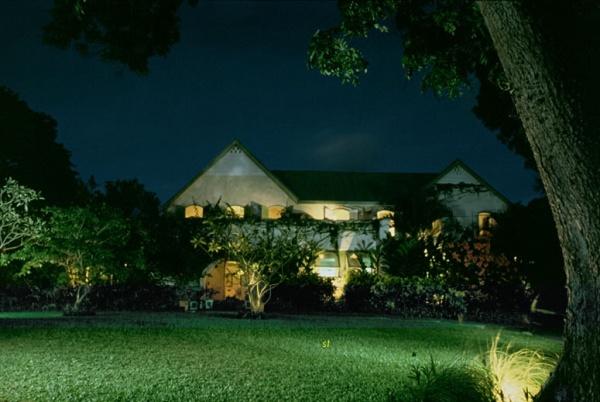 Griffiths, who is precluded by work from spending more than two of three weeks a year in Barbados, enjoys a party – and what better place to hold one than Lascelles House? First, though, he and Angela, a former media and employment solicitor, had to restore the property, which was built in 1738 (although a well in the grounds dates back to the previous century, suggesting that there had been a building on the site before). They have spent almost £500,000 on the work, which took two and a half years. Add in the amount paid for the house, additional land and a floodlit tennis court – used by the professional at Sandy Lane for games and coaching – and the total investment is about £1.9 million at today’s rates.

“The tennis court was built by workmen tom Florida, but in the main we employed local Bajan builders, who said they loved the house,” Griffiths says. “There are enough on the island and the cost was roughly the same as if the project had been carried out in central London.” The entire property is worth an estimated $5-$6m (£3.15 – £3.8m). A typical three bedroom house inland will cost between $400,000 and $700,000.

To help pay for the renovation and the upkeep, Griffiths has made Lascelles House available for rent. Over Christmas and Easter, it costs about £1,250 – £1,600 a day, fully staffed; it’s less than that at other times of the year.

The house is built of thick coral stone, with shutters, lattice and trim painted more recently in the shade of green that the renowned designer Oliver Messel brought to the Caribbean – in particular, Mustique. The way in is through a vaults entrance originally used for storing barrels – a typical feature of older plantation houses on the island.

The four bedroom property, which sleeps up to 10 people, has been delightfully furnished with antiques and reproductions, including four-poster beds made with local mahogany, carved by Rastafarian carpenters from Jamaica. (Fittingly, Laurence Llewellyn-Bowen featured Lacelles House on the BBC’s Holiday programme.)

Among the treasures are monkey lamps, a pair of blackamoors that would have held candles, a haunting portrait of a striking African woman by a French aristocrat, military memorabilia from Nelson’s day and toy wooden horses from the maharajah’s place in Jaipur. An eclectic setting indeed. There’s a huge coral table on the veranda – in the event of a tropical downpour, everyone moves to the dining room indoors.

Recently Griffiths asked David Skinner, the prominent Bajan artist  who has become a friend, if he would paint the house. “I haven’t any ladders,” came the protest.

Not the least of the house’s attractions of Lascelles is its proximity to the prime west-coast residences and hotels that stretch from the Hilton to Tamarind and beyond.; reaching plantation houses further inland involves a map-reading muddle while weaving through acres of sugar cane. Limegrove, a new “lifestyle centre” development with shops, bars and nightclubs, is a two-minute walk away en route to the beach.

The Barbados National Trust already holds an open day each year at Lascelles; last time, this proved so popular that hundreds of people queued down to the main coastal road. Stalls were placed around the garden. 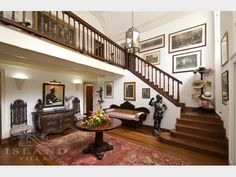 The trust supports an idea put to Griffiths by Zoe Flindt, a Holetown restauranteur, to hold celebrity dinners in the house in aid of charity. Who would come? “Susan Sangster [widow of Robert, the racehorse owner who has a home on Barbados] says it’s her favourite property on the island,” Griffiths says. “The people who moor their boats at Port St Charles, up the coast, and, of course, the likes of Garry Sobers, whom I meet when he comes to England. He prefers vintage champagne in London to rum on Barbados.”

Small wonder that Sobers who forged his reputation in an era when cricketers were not well paid – if he played now, he would be a multimillionaire – has wondered aloud why he did not own a house like Lascelles. Instead, like all his Test-playing contemporaries, he lives in modest circumstances inland.

“We threw a party on the eve of the Barbados Test match when England’s cricketers toured the West Indies in 2009,” Griffiths says. “The former England captains David Gower and Mike Gatting both came, and so did Giles Clarke, who has recently been re-elected as chairman of the England and Wales Cricket Board.

“He has just seen off a challenge from Lord Marland, the Tory party treasurer, who has now become a minister. He also came, so you could say it made for an interesting mix. At least it would have done had they not remained at opposite ends of the garden. I tried to bring about a reconciliation, but to no avail.” it wasn’t all bad: the lyricist Tim Rice was at the same party, and told Griffiths how much he liked the house.

When Griffiths first visited Barbados as a cricketer on a tour in 1969 – he is related to the former Glamoran and England captain Tony Lewys – a three course dinner would have incorporated flying fish, goat curry and mango mousse. Now, eating out on the island can be akin to visiting a gourmet restaurant in Europe – so mud so that the government has been talking to Michelin about having leading eateries such as the Cliff assessed for the first time.

Those who rent the house will be able to watch the three troupes of green monkeys gambolling around the garden in search of fruit from the mango trees and the 150-year-old tamarind tree. Dotted about the replanted savanna grass are bamboo, Jamaican ackee, torch ginger, bauhinia (“poor man’s orchid”) and cordial and mahogany trees.

The influence of India, suggested by the maharajah’s toys, is apparent out-doors, too: a romantic wooden swing, a pretty marble fountain and two benches all echo the colonial theme.

The tennis court and swimming pool, where that celebrated calypso Cricket, Lovely Cricket is audible, prove that, even though Lascelles is routed in the past, it possesses all the amenities for the 21st century. And, of course, for one big party.